Where does bespoke come from?

The verb bespeak is recorded earlier, before 900. It comes from the Old English besprecan. It’s formed from the verb speak and and the prefix be-, which is used to form verbs.

In the English language of yore, the verb bespeak had various meanings, including "to speak," "to accuse," and "to complain." In the 16th century, bespeak acquired another meaning - "to order or arrange in advance." It is from that sense that we get the adjective bespoke.Our earliest records of bespoke clothing are for corsets, footwear and other things that are ordered before they are made.

The word bespoke technically describes something that’s been ordered to be one of a kind. The word is traditionally associated with custom-made clothing. Bespoke tailors measure a person and make a bespoke garment specifically to fit that person. (In fact, the term tailor-made is a synonym for bespoke that can be used generally to describe anything custom-made). The word is still often used this way to describe items that are made-to-order, such as bespoke jewellery or bespoke shoes.

Bespoke also sounds a bit old-fashioned, but that’s probably why it became so trendy—it’s often used to imply a handcrafted, unique approach to making something.

Contact us to talk about your next design with us...

Comments will be approved before showing up.

Let customers speak for us

The 11mm ring is a real classic, a beautiful fit and design, and ultra comfortable to wear. The designer, Janis, creates perfectly circular rings, and this one is no exception to the many others I have purchased over the years. Janis of Illariy oversaw the ring's creation to beautiful safe packaging to delivery and post delivery contact. My ring is a faultless product from a perfectionist designer. And the ring was in Perth from Sydney in three days. Thankyou Janis.

I love the bracelet. Very happy with everything

C
BAROQUE ROUND STUDS WITH BLUE FLOWERS IN 925 SILVER C.S.
The earrings are exquisite, the tiny dried flowers are too cute! Quality item.

BAROQUE ROUND STUDS WITH BLUE FLOWERS IN 925 SILVER

Love my bracelet! Excellent quality 🥰👍🏼 The butterfly is so cute and the package is lovely! Recommend a 100% customer service is the best 😃🔝love ILLARIY💖 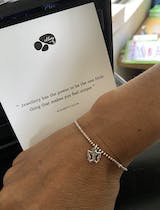